The Atta'a Assistance Center for the Rights of East Jerusalem Residents

The Atta’a Assistance Center for the Rights of East Jerusalem Residents was established in 2004 to help Arab people in East Jerusalem navigate the legal and health systems of the State of Israel. As ‘Permanent Residents’ rather than full Israeli citizens, the 350,000 Arabs living in Jerusalem – some 40% of the city’s total population – face barriers to accessing Israeli welfare schemes, as granted to them in international law.
Permanent Residents of Jerusalem are entitled to all health, education, welfare and other municipal services supplied by the State of Israel, to which they also pay tax. In reality, however, very few Arab residents have access to them. Most do not speak Hebrew, and fear being seen as ‘collaborating’ with the ‘occupying regime’. As well as a general distrust of the state, bureaucratic procedures can be long and complicated – most Arab residents simply do not know what they are entitled to. The result is that many do not receive welfare payments or property tax discounts, and are unable to access health care, or work legally. At present, 78% live under the poverty line.
The Atta’a Center is run by East Jerusalemites, and focuses on the problems faced uniquely by East Jerusalemites. The center guides residents through paperwork and claims with the National Insurance Institute, Israel Ministry of Interior, Israeli housing organisations. They help to fill out forms and gather documentation, complete affidavits, translate letters into Hebrew, and obtain access to lawyers when needed. It is estimated that Atta’a work helps residents of East Jerusalem to receive an additional NIS 15 million every year. 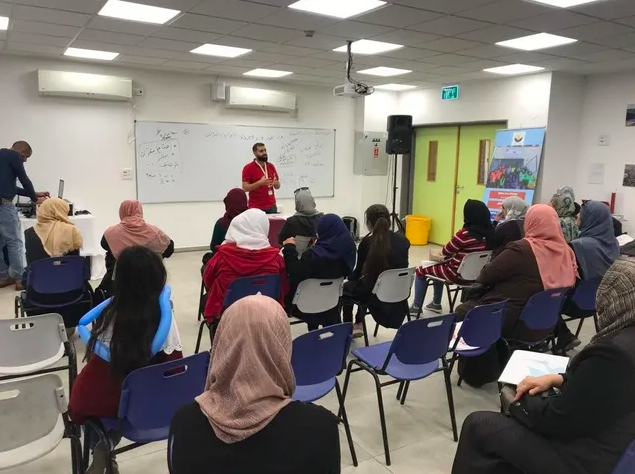 Huge efforts are also channeled into raising awareness of these rights, through frequent lectures, workshops, community meetings and social media posts. The center reaches thousands of East Jerusalem residents through their Facebook page, which has 27,000 likes, and their website, which receives over 40,000 visitors per year. The ‘Holistic Atta’a’ process was also introduced in 2018, to educate residents about welfare services they may never have considered before. Those who visit Atta’a for a singular reason are engaged in conversation about their wider needs.
Going forward, the center aims to strengthen their presence in the Issawiyah neighbourhood. The area on Mount Scopus is home to 20,000 Palestinian residents, on territory held by Israeli since 1967. Tensions between Israelis and Palesinians in Issawiyah have become more unstable in the past year. Daily life is increasingly disrupted by restrictions of movement, hostile police raids, and the use of excessive force. In the summer of 2019, the Israeli-operaed community center, seen as a symbol of occupying forces, was set on fire.
The Atta’a Center’s work in Issawiyah aims to diffuse tensions between residents and the Israeli state by making their personal rights more accessible, and by facilitating dialogue and reconciliation. They expect to engage at least 150 people at numerous workshops, help at least 50 people in 2020 with individual consultations, and reach thousands through social media campaigns.